For Pride month in San Francisco, I’ll be showing at both Spark Arts in the Castro and this national exhibition at the Harvey Milk Photo Center. Join me at the reception June 22nd. The works below can be purchased online now, but understand they can’t be shipped until after the show closes on July 21.

I’m proud to exhibit the three pieces below.  The first has a LGBT theme, while the others are just simply beautiful paintings the center wanted to show. I really appreciate it when exhibitions like these don’t get hung up on homoerotic images, but instead embrace all the art our community creates.  Thank you Director David Christensen. 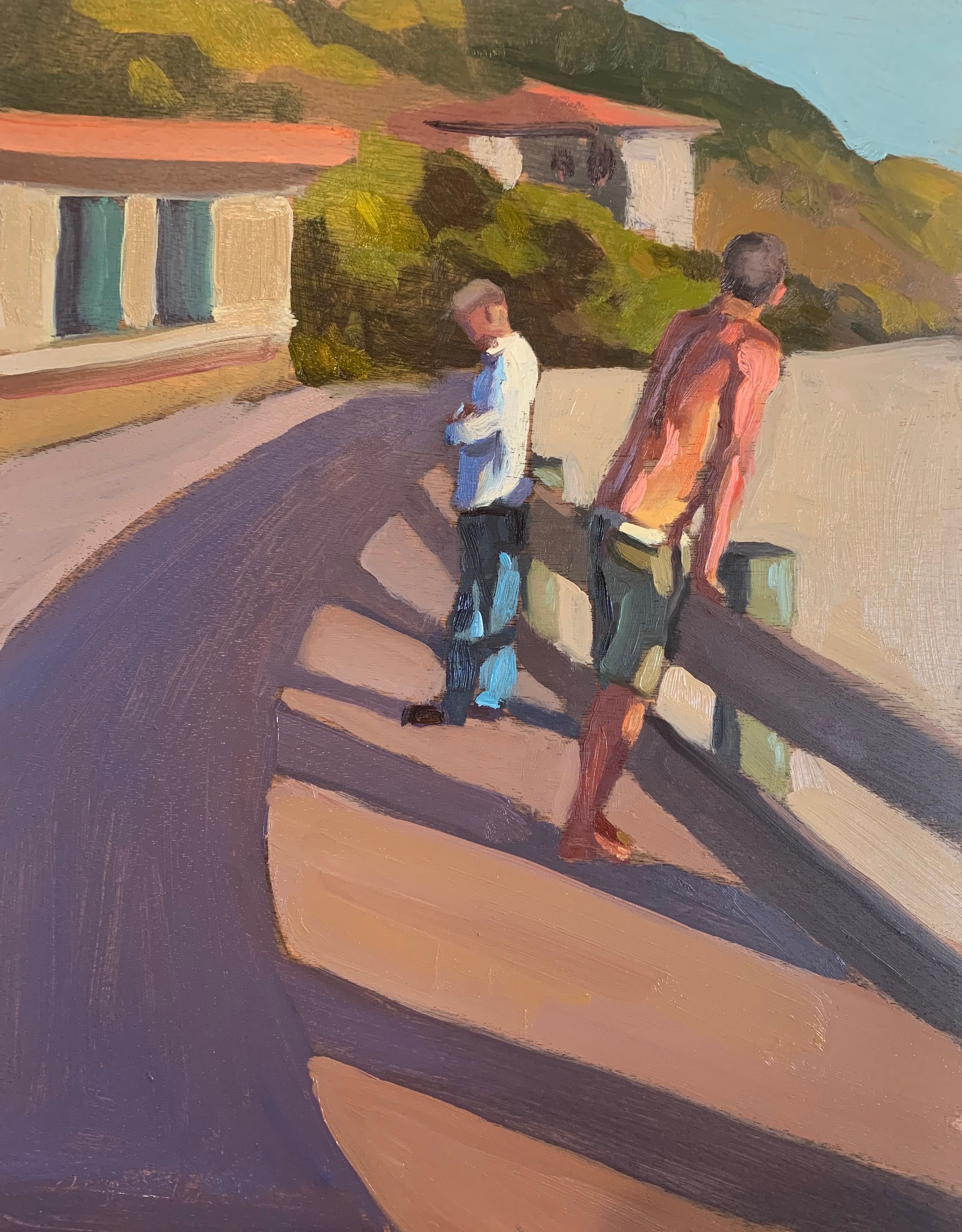 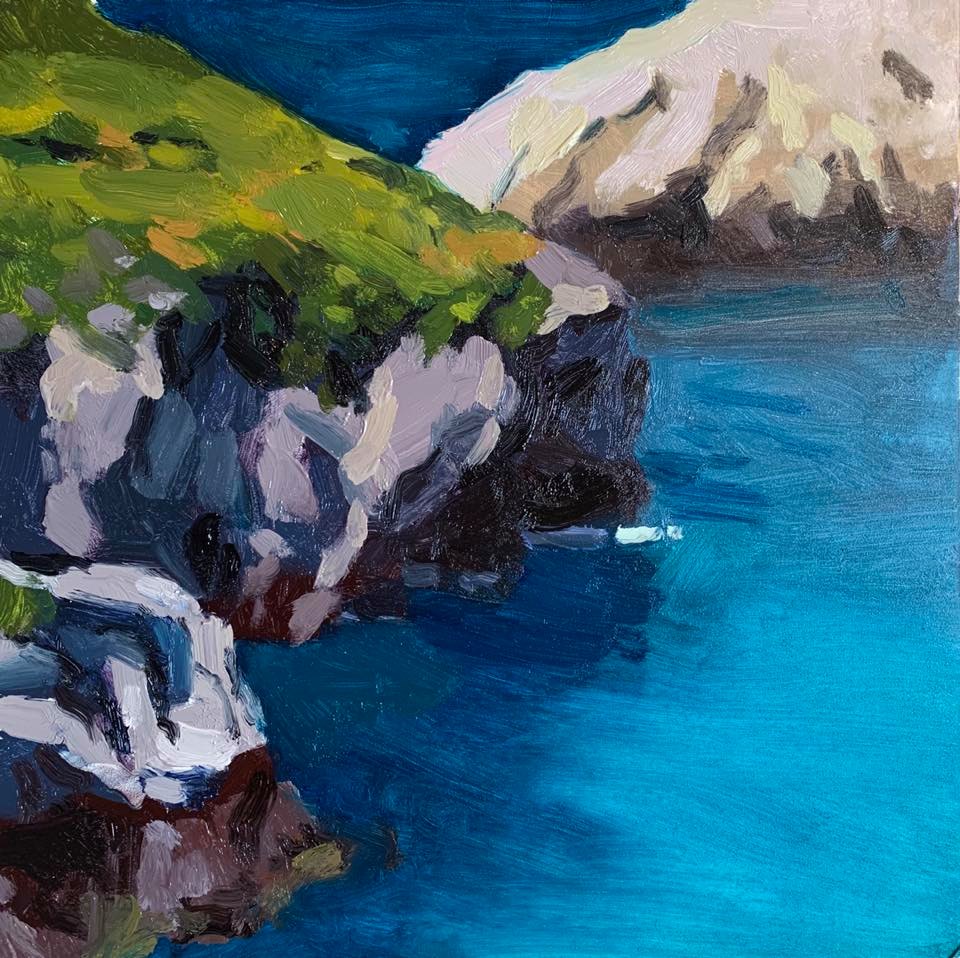 Over the past several months, I’ve joined artists Alexander Nowik, Billy Douglas, and Steven Pomeroy under the leadership of Thomasina DeMaio and with the help of trans activist Donna Persona. Well over 100 portraits of local trans community members on display, including photographs, paintings, digital drawings and graphite.

As each person sat for their portraits, they told us of incredible stories of survival in the face of widespread bigotry and transphobia. Here’s what Thomasina DeMaio had to say about the project:

“It has been a joy working with my fellow artists on this Donna Personna project..she has put her heart and soul into bringing to studio not only leaders in this community of transgenders but individuals with stories and histories that changed and educated me as to who and what its all about.It has been enlightening and I feel privileged to be able to participate in documenting this incredible community. Our intention is to leave behind a comprehensive series seen through 6 different artists eyes for the public to view ,eventually in a book( fund raising for trans issues) and for the public to embrace and understand what has been in front of them for years and is not going away. Two spirit individuals are powerful, special and simply a force to be reckoned with. I will always treasure this experience and I thank each and everyone of our subjects for taking the time to come and sit for us…you made it happen!”

Join us at the reception Saturday, May 11, 6-9pm at the Eureka Valley Rec Center, San Francisco.

My solo show at Spark Arts San Francisco will include a mix of oil and watercolor across many themes, including local city scenes, sea/landscapes, figurative and some new abstracts. Join me for the reception, April 4th, 6-9PM. Here’s a slide show of some of the works that will be shown.

I will be showing the landscapel below at the Harvey Milk Photo Center January 8-February 7 with Art Saves Lives, curated by Thomasina DeMaio. The reception will be held January 18th, with live music featuring the incredible Tribal Baroque! It will be an amazing reception, hope to see you there.

You’ll see my paintings below, and can purchase at anytime here online. The show runs through December. 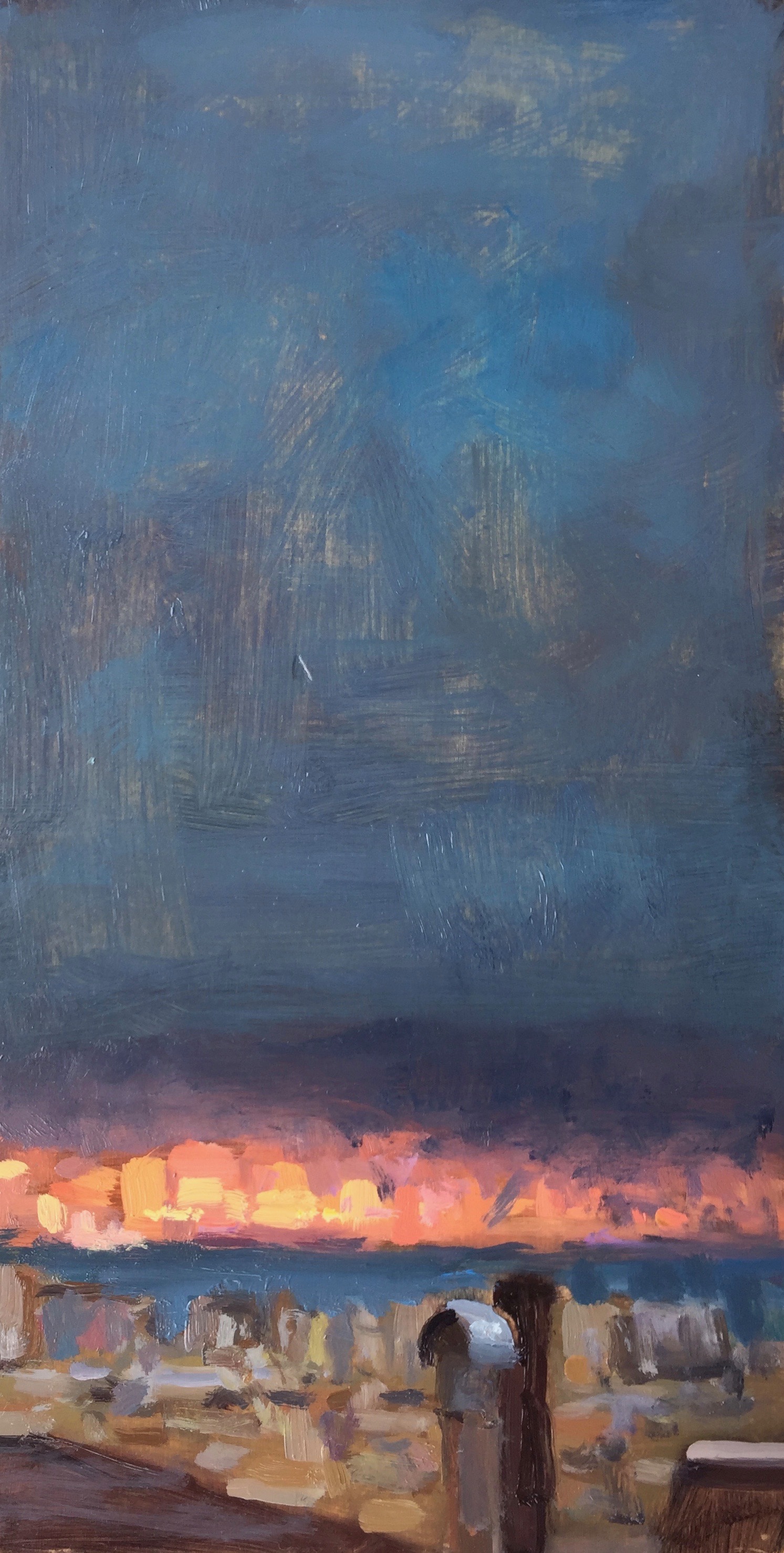 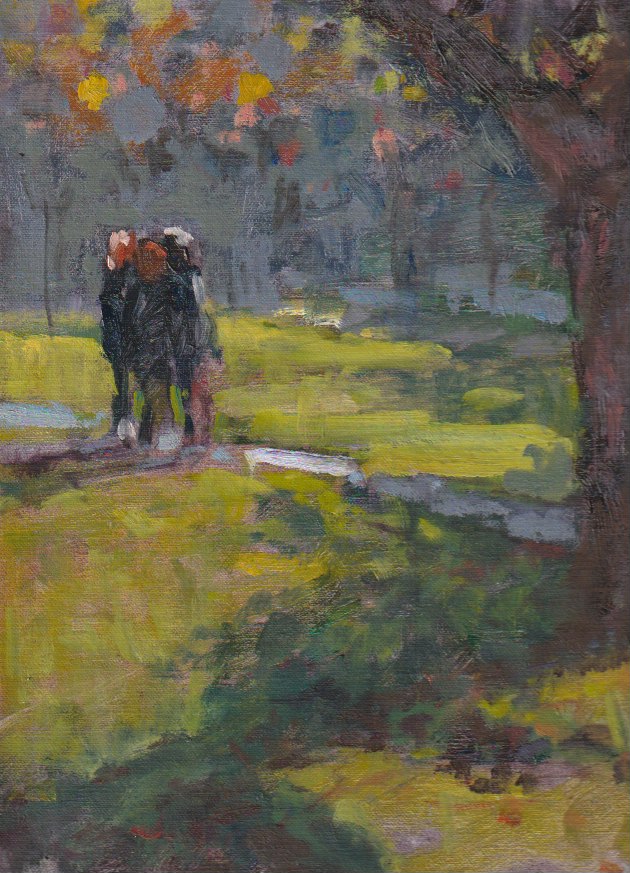 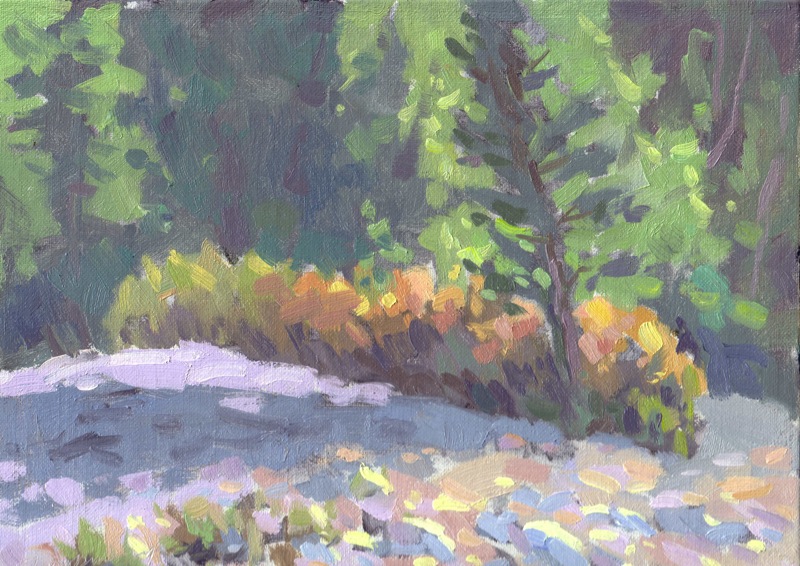 From my popular “Beach Men” series: 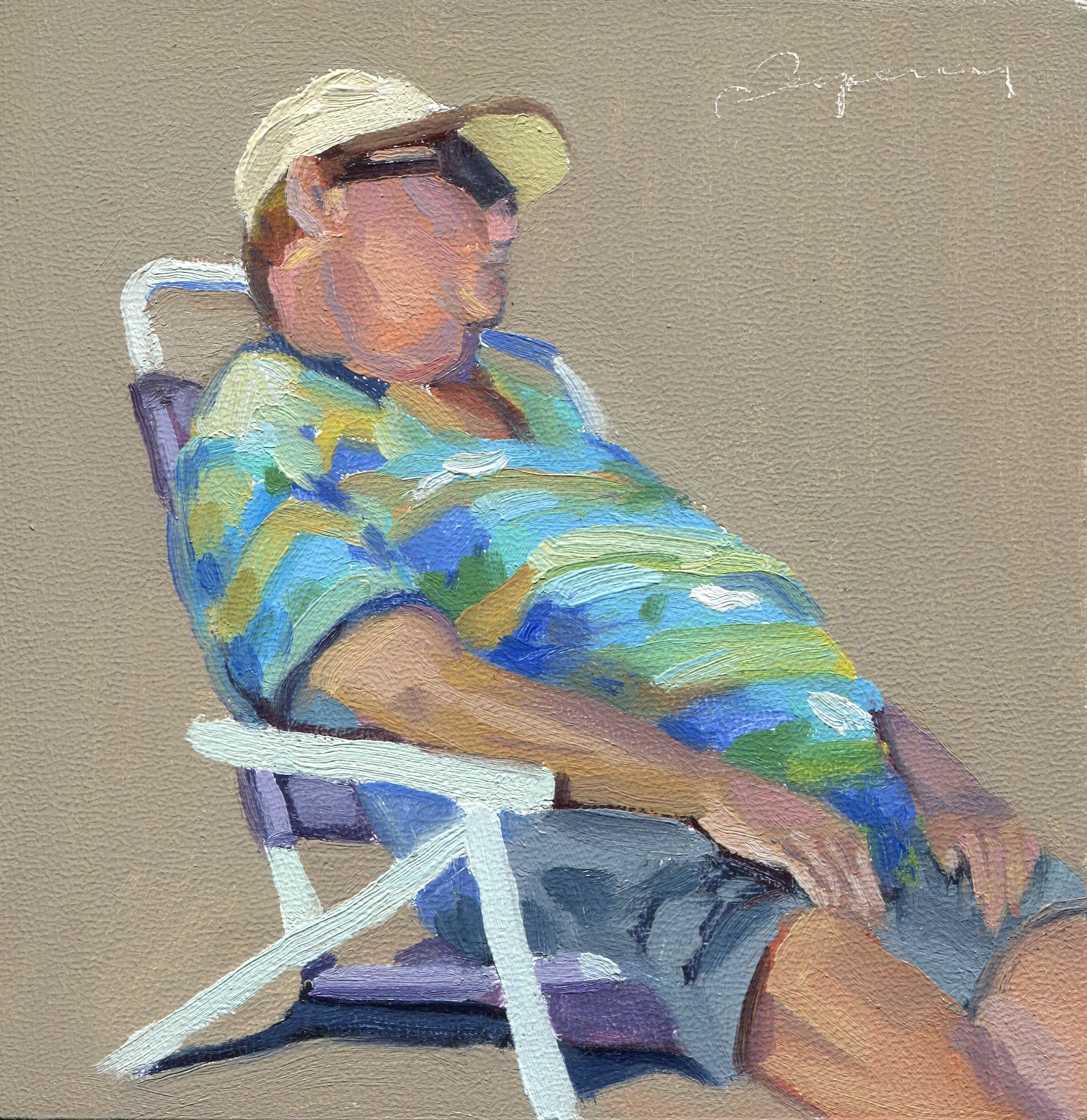 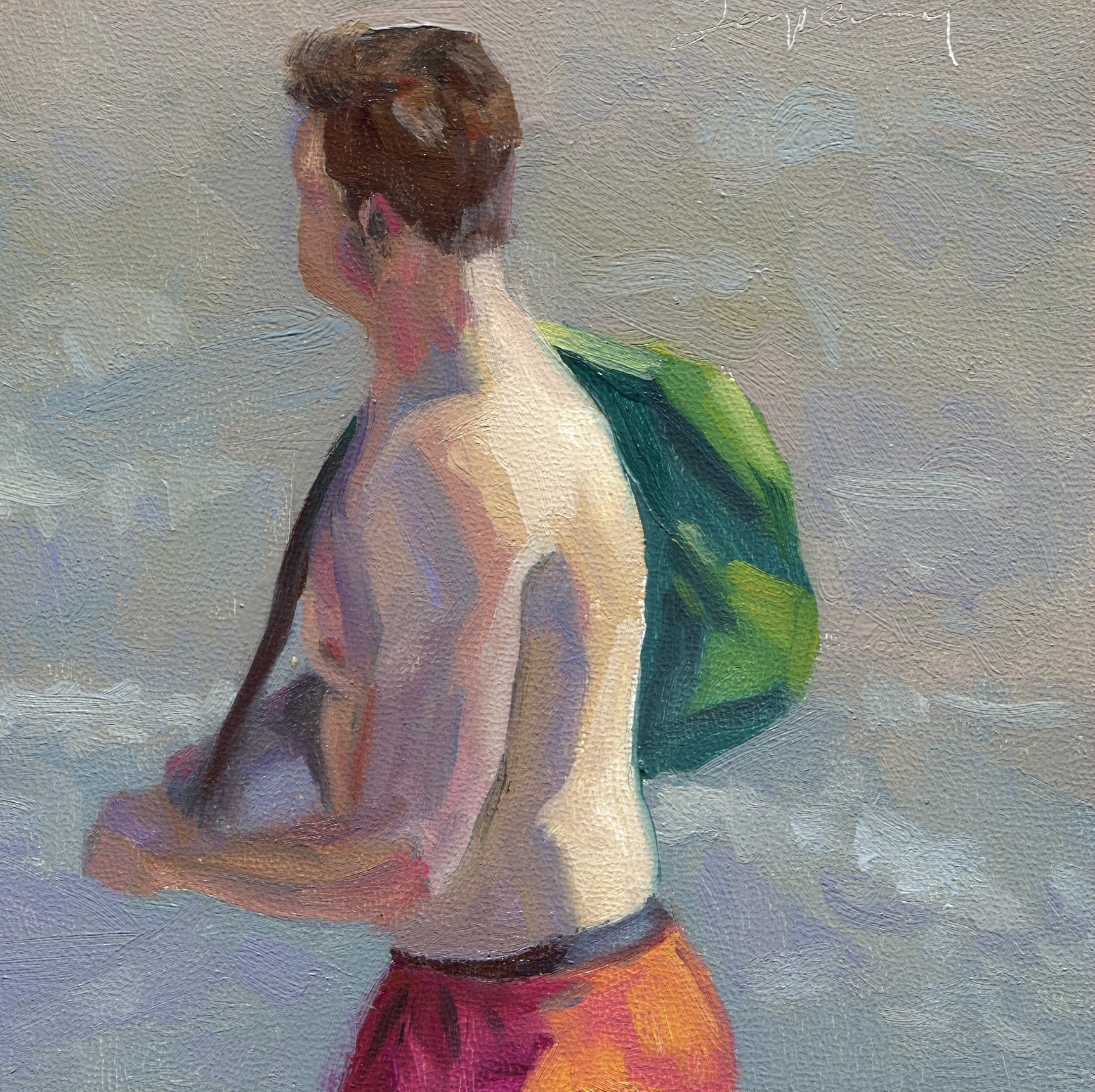 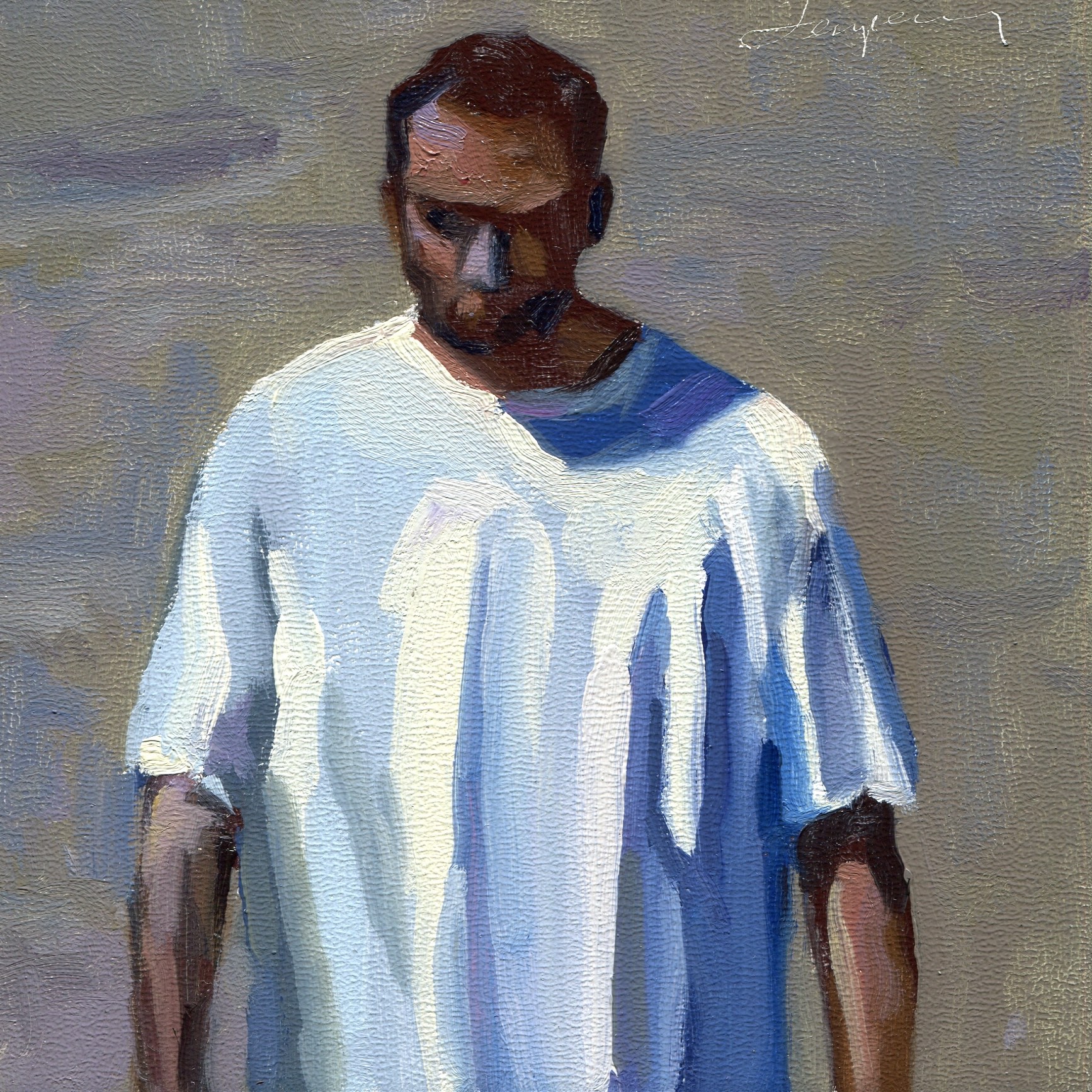 Impressionistic realism has been the foundation of my art for many years, but that’s starting to change as I explore mixing identifiable forms that are relatable to abstract forms that work on a different level. Abstract art has merit, but I hadn’t pursued it until now because I struggled with how to communicate with it.

For me, the human figure is the most relevant symbolic subject in art.  People are complex: outwardly transparent, but inwardly hidden.  We respond to the Mona Lisa because while her body is drawn to perfection, her veiled thoughts through her smile intrigues us and draws us to this painting.  So how can a painting be both approachable and mysterious?

Fast forward 450 years from Leonardo da Vinci’s Mona Lisa to the 1950’s Bay Area Figurative movement (lead by David Park), when an intriguing fusion of figurative art combined with Abstract Expressionism. Painters in this school ( David Park, Richard Diebenkorn, Elmer Bischoff,  Wayne Thiebaud…) had different reasons for mixing figurative representation and abstraction, but many found a dead end in Abstract Expressionism’s ability to communicate. They resisted being constrained by a formal “school”, but instead believed in taking freely from both figurative and abstract traditions.

I’m working on a series now that uses the figure as an anchor, like this movement.  In one of these paintings (“Green Shorts”, below), a solitary figure stares out at an abstracted plane, resembling the sea. (or, is it a clouded sky?).

The figure is used as an entrance into this world of sunshine and contemplation.  He stands on the picture plane as if an observer himself to the alternating bands of blues, violets and grays.  It’s designed in such a way that his surroundings are open to interpretation: he could be in a museum (barefoot—probably not allowed!) surrounded by a large painting himself.

I had a lot of fun with this one.  While the reference photo I used is in fact of a man at the beach, the viewer can have fun with this and imagine other scenarios. For example, he could be standing on flat land, looking out at distant snow-capped hills, sky, and clouds above.  If you were not told this was the sea, could you see alternative realities like this for his view?

This ambiguity is what interests me, because I believe strongly that the best art requires participation by the viewer. Just as decoding the Mona Lisa’s thoughts are the viewer’s creation, I seek to give the viewer the opportunity to find their own meaning. This makes the painting theirs through co-creation between viewer and artist.

So that’s what I’m working on.  It is fun creating these worlds, but not easy—art never is!

Postscript: This series will probably be shown in San Francisco at Spark Arts, in April, but specifics TBD.

Mike and I have planned a trip to Maui! It’s been a long time since we’ve enjoyed a vacation together, so I’m really looking forward to it. Since I don’t plan to travel with my full oil setup, I will paint watercolors plein air. I think there’s something about Hawaii and the tropics that lends itself well to watercolor–the lightness of it all.

To prepare my watercolor skills (which are minimal), I’ve started to paint the figure. It’s a great way to “kill two birds with one stone”: both learn the medium and continue to improve my drawing skills. Of course, painting the figure is the best way to improve drawing because it’s obvious when you make even the slightest error. The first two studies below were painted at a local gay bar (Moby Dick). An artist in the neighborhood thought it would be nice to have a drawing group there, and I have to say, it was really fun. It is a gay bar, so lots of pulsing music and local characters, but I ended up having a great time. It’s Monday nights (at least through the Summer )if you’re interested (7:30-10:30pm).

The last painting is just another tennis player study, in oil. I’ve been doing a seriers of these. The strong light on a tennis court makes for some very interesting color situations–especially reflected light. Enjoy!

What I love about being an artist is the opportunity to continually learn and explore.  My focus recently is learning to use new and different materials. Royal Talens sent me a set of Cobra solvent-free oil paints to try, and these are my first results.  The benefit is I don’t have to use solvents, which even though labeled “odor free” really are not, and it’s nice so nice to clean up with soap and water!

As I explore how to work with this paint, I’m find myself painting with a much thicker impasto technique–and I’m enjoying it!  Trying new materials can push artists in new directions and open up new possibilities.  I hope you enjoy these studies, all done in San Francisco.

I’ve been back to the figure, having fun painting small studies.  Painting the figure is great drawing practice.  Enjoy!

I’m so lucky to live in a city with so much beauty to paint!  I’ve neglected it too long, often looking for inspiration in Carmel, the Central Coast, and elsewhere.  I may eventually paint citiscapes again, but for now, enjoying the beauty of the coast.  The only work not from San Francisco below is from Alta Lake, a friends home in The Sierras we get to visit a couple times a year.  Enjoy!

I’m thinking of Summer, which is why I suppose I selected this reference photo to paint.  I wanted to depict a sun-filled day (just as we had in San Francisco, today). Speaking of sunny weather, I’m headed to San Miguel de Allende this Friday, where the forecast is low 80’s all week.  Although Mike can’t make this trip, I’m looking forward to a full week dedicated to painting with Frank Gardner.  I’ll try to post from Mexico, if I have decent WiFi at the hotel.  Cheers.

I enjoy alternating between painting the figure and landscape.  Painting the figure hones my drawing skills, and landscapes allow me to play a bit more with form, color and brushwork.  I’d love to bring that same fluidity to my figure work (and I have achieved that occasionally), but I have trouble being too loose in the figure, because I loose form too quickly.  There are some artists that do this extraordinarily well, and they inspire me (eg, Dan McCaw).  I’m working on a series of figure paintings for a possible show in San Francisco this year.  Cheers!