Just got word that I will be exhibiting with fellow artists from the painting trip at Timberfield, the Forbes family estate.  The show will be at the Forbes Gallery on 5th Avenue from June 23 – September 10th. I am excited and frightened at the same time!  The group includes some incredible artists, most of whom are from a different school of art than me (I’m more expressionist/plein air/self-taught, they more formal atelier training).  So, I will be painting like a mad man between now and April 1st, when my paintings are due for the selection process.  Here’s my first attempt.  I’m planning a selection of both landscape and figure work.  Wish me luck!

Tucson may be on your mind, too.

I was there just a few months ago for a workshop with Colley Whisson. The recent tragedy got me thinking about the town, so I started looking through reference photos, to see if I could find a way to express in my painting how I felt. Like sunrise or sunset, the event appears to be a kind of turning point. My personal hope is that it’s the sunset of an era of vitriolic political speech, or the sunrise of a new awareness. That’s what I like about painting this time of day: you don’t really know whether it’s sunrise or sunset, it’s up to you.

In any case, my heart is in Tucson, wishing the families of those effected the best hope has to offer.

“Artists, Collectors, Suppliers, Schools, and Dealers have been asking for the return of Plein Air magazine since it was converted to Fine Art Connoisseur magazine in 2006. Now it is back with the same respected publisher, B. Eric Rhoads, and a veteran editor, M. Stephen Doherty.”

I’m also happy to say I will have an role in this rebirth, serving on their Advisory Board. I’ve already sent Stephen a list of artists I hope to read about in the magazine, with a slant towards the unknowns, and those better known outside the United States. I’d love to hear your thoughts about who you’d like to read about—please take a moment to enter a comment.

“Place your advance subscription today and receive our special digital edition of “The Best of the Original Plein Air Magazine.” We’ve taken the best articles from our past magazines and packaged them into a wonderful digital magazine. This offer expires January 10, 2011.”

Stephen writes about the weekend in American Artist Workshop magazine (Summer edition, on news stands now). That’s Camie Davis on the cover, who’s also featured in the magazine. She did a wonderful job of capturing the four days on her blog (day 1, 2, 3, and 4).

Here’s one of the paintings from the trip.  The artists are to be featured in a show at The Forbes Galleries in Manhattan next year.  This will be my first show in the “Big Apple”!  I’m thrilled (and a bit nervous…this is an incredibly talented group!).

I’ve cut down on the number of plein air events (one year, I did over 10–way too many!), and instead, are looking for events that will take me to new locales I haven’t painted before.  Just finished Hearst Castle Plein Air, and my next show is in beautiful Door County, Wisconsin (I just mis-spelled Wisconsin, thanks spell check!  I’ve never been to WI). The week-long event is July 19-24.

The list of artists is impressive, most of which I haven’t painted with before, like fellow bloggers Colin Page and Marc Hanson, and old friends like Carole Gray-Wiehman and Al Tofaneli. So, if you’re in the area (which, apparently includes Chicago), visit!  I’ll try and post that week, but can’t guarantee it.  “Job 1” is to paint 🙂  Here are some things to know about the event:

Okay, I have an agenda here. American Artist has included my painting below (STILL AVAILABLE, by the way) in their 2011 American Landscapes calendar! It’s the August “pin-up”. The same painting was also featured in the 8-page article on my work in the April, 2010 issue and the 2006 Central Coast National Art Exhibition. I’m surprised it’s still available, but, you never know what people will like.

The calendar is available for sale today (here’s a link to their store).

Here’s a snap-shot of the rest of the calendar:

It’s been a turbulent few weeks, so I’ve not painted much.

Spoiler alert: this story does have a happy ending. Some of you may know I was diagnosed with cancer in July. I had a rare malignant tumor in my ear canal. After 2 painful operations–one that completely reconstructed my canal–I was told I still wasn’t in the clear. If you’ve gone through something like this, you know how it can make you re-assess life and your priorities. In fact, a similar health scare in 2000 is what propelled me into art. Without a clear end, I decided to get a third opinion, Dr. Jack Resneck at UCSF. In our first meeting I formed an opinion of him as a careful, thoughtful doctor. He believed the diagnosis was rare enough that a re-test of all my biopsies and tumor were in order. I got the good news the week before Thanksgiving: I didn’t have cancer! The growth was benign. I was relieved and pissed off at the same time, but thankful in the end that the treatment could end and I don’t have to worry about it. I’ve lost a bit of hearing in that ear, and have some scars, but I’ll take that over the alternative.

An hour after I got the good news (while at work) that my tumor was benign, I got a call from my husband, Mike: his mother was dying. Talk about a roller-coaster. We both left work right away, and we made it to her bedside less than 24 hours before she passed. It was very sad, but she’d been suffering for some time, and was ready. She was really terrific. We’ll miss her.

And yes, there is finally a painting. I’m trying to get life back to normal.

This was done from a reference photo of Avila Beach, while I was there painting for San Luis Obispo Plein Air this year. The “golden hour” light was striking the rocks like fire. It was quite a site. Enjoy!

I received a nice note today from the “Friends of Hearst Castle“, inviting me to be one of 25 artists chosen to participate in their 2nd annual plein air invitational!  A percentage from the sale of the art benefits Friends of Hearst Castle’s artreach program for under-served youth at-risk. Here’s a web page with images from last year’s event.

It should be fun.  I’ve driven by the historic landmark numerous times, but never been on the property.  Do you have any tips?  What do you like most about Hearst Castle?

I’ll be painting there May 12, 13 and the show is June 5, 2010.  I’ll post more information as it becomes available.  I assume you can visit the landmark the two days I’m painting there to watch, but will confirm in January.

I have a few shows coming up that you may be interested in.  Hope to see you!

Today’s a big day! Stephen Doherty’s 8-page article about me in American Artist arrived in the mail to subscribers today. My painting, “Secluded Cove” is featured on the cover, along with several other works inside.  The focus of article is my experience in social media (eg, Facebook, YouTube, etc) and this blog. After 390 posts and 1,414 reader comments, it’s your participation that has made this possible!  I’ve really enjoyed your feedback, and the opportunity to learn from you by reading your own blogs. 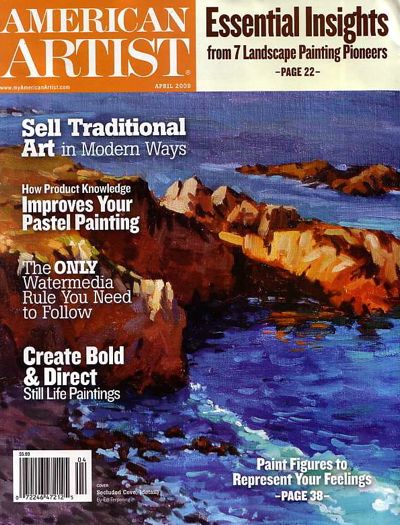 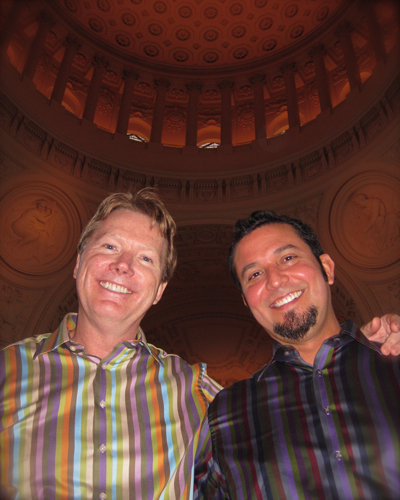 We are painting this Sat (tomorrow) at Golden Gate Park at Stowe Lake/Strawberry Hill, starting at 9:30AM. I will paint either the rock stone bridge or the Chinese pavillion.

The next one is Sat, April 26th at Pescadero State Beach (~30 miles south of Half Moon Bay).

If you attend and would like a demo or paint with me, track me down.