I’m attending John Ebersberger‘s workshop this week, so been a bit busy.  This is my first attempt embedding a video using my new blog software, so hopefully this will work!  If you don’t see an embedded QuickTime video below, here for the video posted on YouTube.

This is a plein air figure painting start by John, referred to as a “mud head” study by the Henry Hensche school of contemporary impressionism.  I’ll post my own in a few days, along with additional commentary and information.

I continue to experiment with painting in a higher key.  While I’m getting there, I’m not as light as I’d like to be (see Bato Dugarzhapov, a Russian artist I greatly admire).  Here are  a couple more studies, and a YouTube video of the first painting in progress: 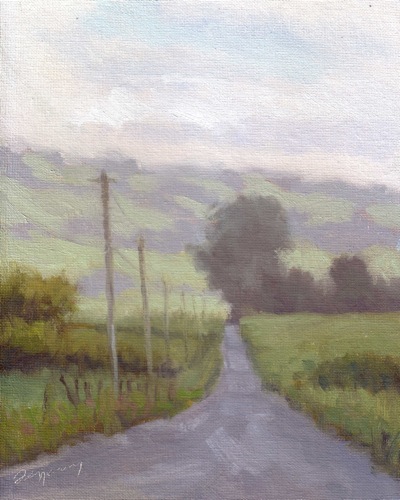 This painting was done from a reference photo I took when Mike and I visited The Mediterranean last year.  It’s Corfu, Greece, a really beautiful island. 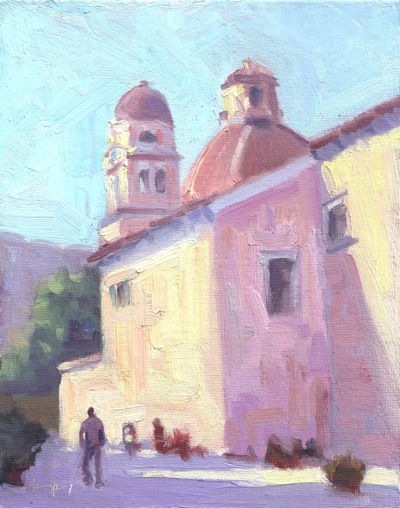 I painted this snowscape in the studio last weekend, and captured the progression of the painting from start to finish, which I later used to create a movie (see below). I’m still really enjoying this subject matter. I think I need to work on the reddish brush a bit more, to make it more atmospheric. 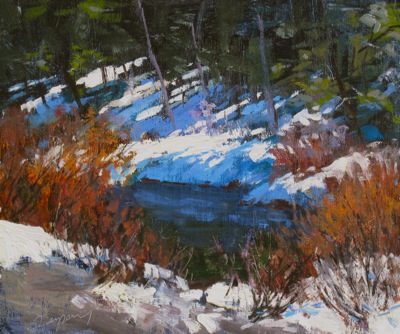 Here’s a video of the painting from start to finish: 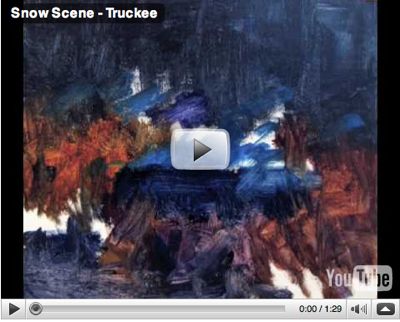 I spent last week in sunny Scottsdale, Arizona inside a classroom with 4 other enthusiastic students studying with Kevin Weckbach.  Kevin is a generous teacher who both paints well and can explain his thought process thoroughly.  As you may know, this is a rare combination!

I believe I first saw Kevin’s work in the annual OPA catalog.  Among the hundred or so predicatable paintings, there are always a few that sneak past the jury and scream originality and true honesty.  That’s why I wanted to study with him. I wasn’t expecting a lot, because my assumption was that someone this original probably can’t explain how it he does it, but he does so well.

I’m not alone in my assessment of his teaching ability.  Kevin teaches at the Art Students League, Denver, where he took over Quang Ho‘s class (and where he maintains a two year waiting list).  This post includes my class notes, his demos, and some of my own painting studies from the class.

Levels of an Artist

As artists, it’s difficult to measure where we are in our growth, in contrast to other professions that offer levels of certification, by testing practictioners for an agreed upon set of skills.  Kevin described the three levels of an artist:

If we all had one system of painting, reaching the intuitive level would be great, but what makes things interesting is the fact that we can represent subjects in a wide variety of visual approaches.  We’re not cameras, we’re artists, so when we paint, we seek to convey how we feel about a subject. If there were only one way to represent a subject, every painting of the Grand Canyon would look the same.  Originality comes about when we combine our feeling for a subject with a visual approach to represent it.

So what’s a visual approach?  As you can imagine, there are many ways to approach painting a subject.  Kevin taught 4 of 10 visual approaches to painting.  The 10 include: Dark by Pattern; Local Tone; Light & Shadow; Line; Texture/Pattern; Color; Shape; Form; Siloette; and Front Lit.  Each approach has its own set of “rules”, but the main point is that they provide alternative ways of seeing subject matter and representing it in paint.

This approach may be good for representing:

The Mary Cassett painting above was offered as an example of this approach.  It has three clear values, with only slight shifts within them: the light (bed linens, clothes, china), the mediums (table, skin tones) and the darks (hair, back wall, etc).  You can see how each value creats a path for they eye, and is virtually connected.  Kevin’s demo below shows how he approaches painting in Local Tone.  Click the YouTube video below to watch. 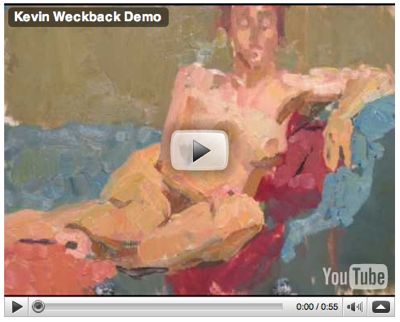 The Willem De Kooning painting “Excavation” was offered as an example.  Kevin spent the least amount of class time on this approach, so I don’t have demos or more examples to show.  I’m also not entirely sure when one would select this approach over another.

This approach is characterized by:

I painted a Dark by Pattern painting below.

I put together a video of my painting “Near Garrapata State Park” from start to finish, by stitching together photos of the work in progress.  I used YouTube’s new annotations feature to add notes on my process.  It’s short (exactly 1 minute), but I think it demonstrates my approach well.  Click here for a list of video demos on my blog.  Enjoy! 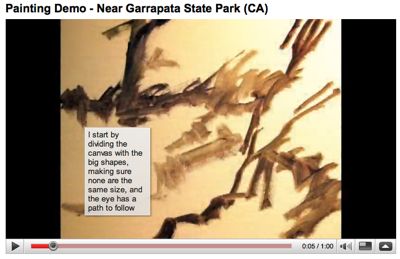 I’ve painted the same spot “en plein air” several times, so I’ve now begun to tackle some larger paintings in the studio. This isn’t essential, but I think it helps. 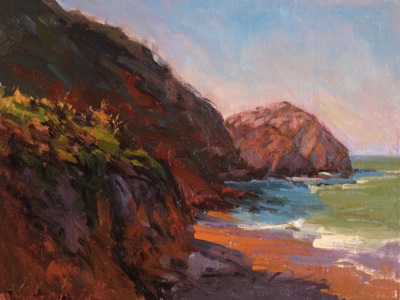 I took snap shots of the painting in progress to show you my start-to-finish process. I’ve noticed now that YouTube has an “Annotations” feature. As the video plays, faint shapes will appear on the video. You can click those shapes to read my notes. Interesting. Try it and let me know what you think of it. 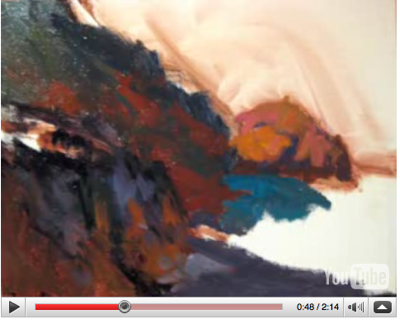 I took snap shots of this painting in progress, and stitched them together to make a YouTube video (using iPhoto and iMovie).  These are  useful to others interested in my process, but they’re also good reference for me. I often times over-work a painting. I think perhaps it may have made sense to stop this one about 3/4 of the way through. What do you think? 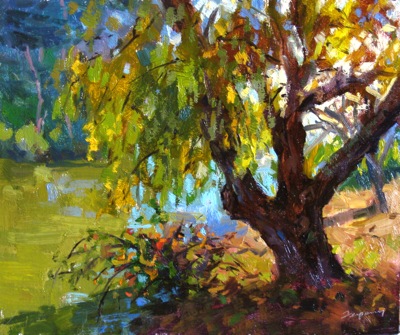 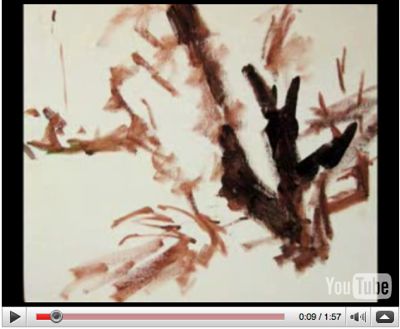 I’m finally back!  I’ve been visiting family in Southern California, and unfortunately, no WiFi was available to post.  Time to catch up.

This video demo shows a how I interpreted a Colorado sunset in paint.  I took snapshots throughout the painting process and string them together in this video.  There were many shots taken, so you’ll get a better idea of how I go back and forth to adjust a painting before it’s done. I’m still struggling with dark values. I wanted the sky clouds/colors to be rich and warm (ie, as little white as possible, because white dulls color and cools it), so I get the ground and hills relatively dark.  You’ll notice in the video that 3/4 of the way through I lighten up the hills (particularly those in the distance).  Perhaps the warm clouds should have been lighter?  I need to learn Photoshop, so I can play with these “what if” questions on my PC. I recall that Kevin Macpherson wraps his paintings in plastic and paints over them, to check alternative color/value, and also as he works on larger works and wants to check his color mixing.
The video looks darker than the original, so keep that in mind. 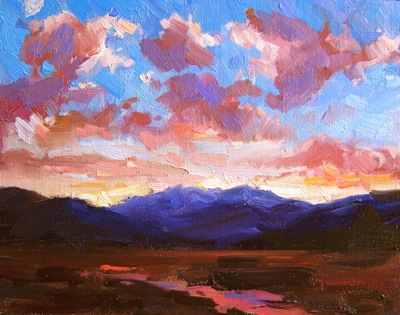 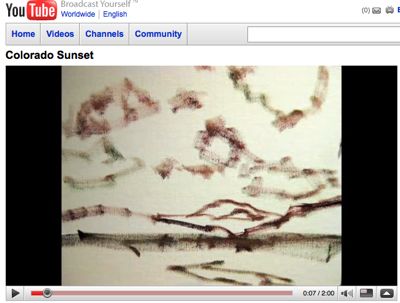 I think my shadows have been overly dark lately, so I’ve been seeking opportunities to “lighten up”.  An old reference photo of “China Cove” in Point Lobos did the trick. The photograph was over exposed, so everything was lighter than it would have been otherwise.

As I was painting this, the colors in the photo where washed out, so I also thought about pushing them further.  I had a good time with this painting, and very happy with it. It has the sense of light I was looking for.  I also reminds me of somewhat of Camille Przewodek’s colors. I tend to drift between schools of color, from Camille’s light key paintings to the more dramatic value changes of the Russian impressionists school.  I think I’ll stay in this key for a while, and see how things go.

Also, I took photos of the painting in progress, so created a little video (see below). 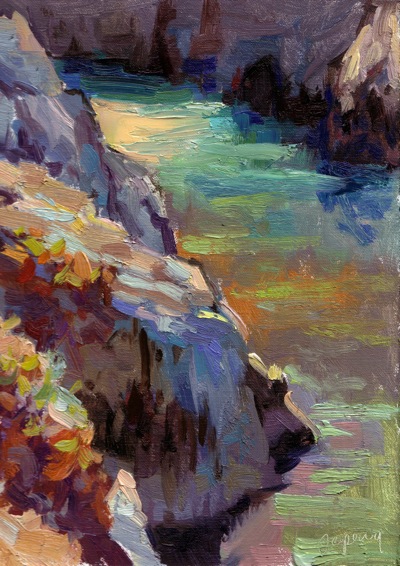 Here’s a short video of the painting in process. 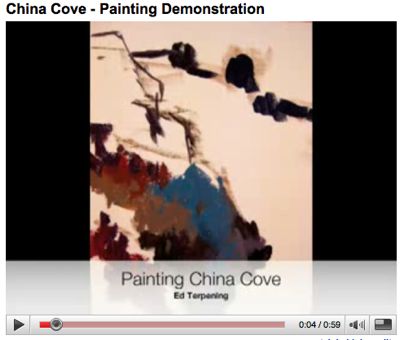 Here’s another study of “Lands End” (Golden Hour) I started in my previous post.  I created a video of the process, by stringing together still photographs of various stages of the painting.  I like this composition.  The large tree reflects the strength and gracefulness of the Monterey Cypress, but I’m not sure about my darks…they may be too dark.  I may try another study today where I play with that a bit.  Painting dark darks provides nice contrast with light (which I clearly needed here), but it can also make the painting too “heavy”. 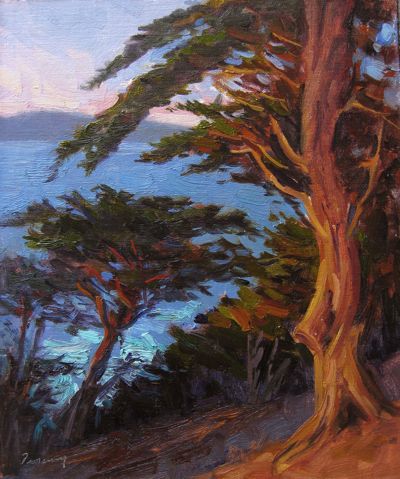 Click this screen shot to get the demo (be sure and click “watch in high quality” in the lower right corner of the video, a new YouTube feature. 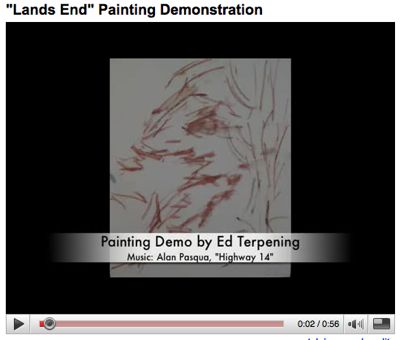 Another study, based on my photos of Venice. I enjoyed painting this one a lot. I enjoy mixing the subtle earthy tones of old buildings or nature with man-made shocking colors, like the clothes hanging to dry here.

The photos aren’t great (taken with my camera phone), so when this finishes drying (in the Wedgewood Stove, as always), I’ll take a digital scan. I strung together four photos of the work in progress, imported into iMovie, and made a short video now on my YouTube channel. 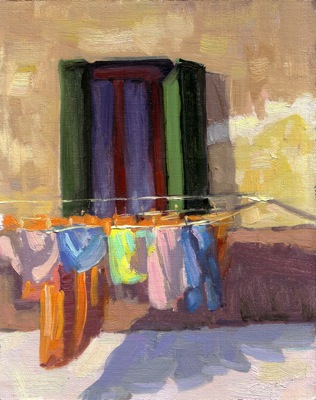 AVAILABLE IN MY ONLINE STORE FOR $150

One area I really focused on, to make the light “read” well, was the difference between light and shade across subtle color shifts. To see what I mean, look at the shadow cast by the open green window shutter. See the difference in the building’s color and texture, from a yellow at the bottom, then a white crack patch (not yet painted), then an older ochre color to the top. It was critical that I got the shade/light relationships working across that plane. I think I did it, but let me know what you think. I’m less sure about that darn green shutter in full light. It’s just not sitting right. Perhaps it’s too cool? What do you think? 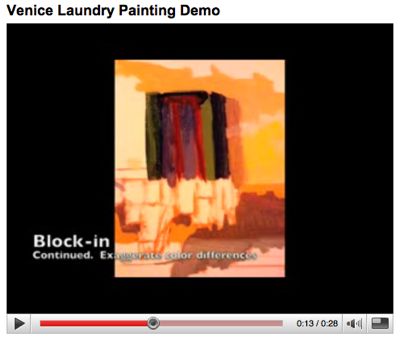 Palm trees have beautiful strength, character and movement. They can make a great subject. While in 1,000 Palms a few weeks ago, I painted two field studies (one, two) of a view between groups of palms to the steep hills below. The two studies where done in different light conditions, the first with the hill in shadow, and the second, a smaller opening than the first, which showed the hill later in the day as it was touched by the late afternoon sun.

This one, my third, shows the light conditions with the light behind the palms, but looking in the same general direction. I used the reference photo in my studio, together with some of the color notes from the first two studies. Since I was in the studio, I remembered to take snap shots at various stages of development, and so have a little video made of snap shots tied together with iMovie. This has been posted on my YouTube channel (and added to a playlist I created of other painting demos).

I can see this series holding interest, and think I’m ready to use these studies and paint much larger studio works. Stay tuned for those, I have this Friday off, so maybe I’ll dedicate the day to this task. 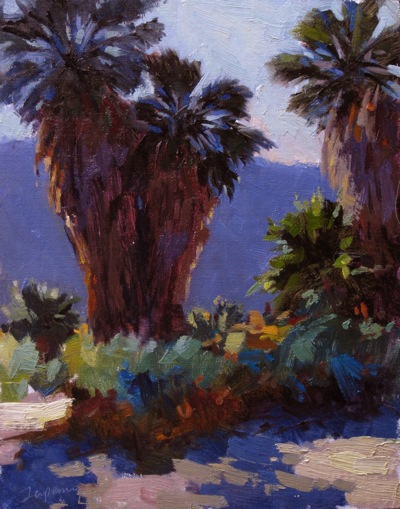 Here are the first two paintings using this basic design (click any to enlarge). What do you think? Any favorites or feedback?