Painted two “industrial” scenes today, the USS Hornet and a couple of empty cargo containers. I wasn’t able to get a decent photo of the latter tonight, so will post tomorrow.

I’m happy with the painting of the USS Hornet. I wanted to convey the enormity of the ship. Most artists opted to paint form the deck. I checked it out up there, but didn’t find anything that struck me. This will do. I had fun interpreting the various gray, reflected light and shapes. The color of the water (and reflections there) was also complex and interesting. That’s the San Francisco skyline in the background, right. 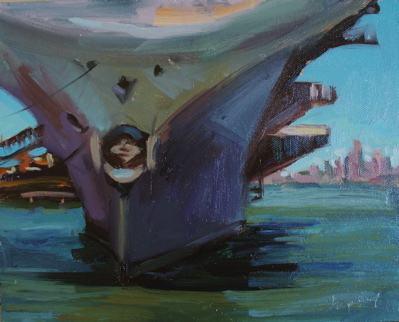 The ship has an interesting history. Yes, it played a role in WWII, but I found the NASA history most interesting. Do you remember when the first Apollo mission that landed on the moon (11) fell to earth? The USS Hornet recovered the lunar capsules. I remember the tension at the time…would the ship get to the astronauts in time?  Would they drown? When they brough the astronauts aboard, they had to endure 21 days of isolation. Do you remember that Airstream they put them in? It’s on the ship! I walked around inside. It had a meeting room, bunk beds, kitchen, bathroom–the works. That’s history. Oh, they had some large moon rocks too, but I just couldn’t get over the Airstream–a childhood memory come to life.

This photo is from the Boston Globe from 1969. Caption reads, “President Nixon greets astronauts in the Isolation Van.” From left to right, Neil Armstrong, Michael Collins, and Edwin Aldrin Jr.