The Palace of Fine Arts in San Francisco is no longer an art museum–as you might think–but a park and very fun hands-on science museum called the “Exploritorium” . The complex of buildings was built for the 1915 Panama-Pacific International Exposition, just a few short years after the devastating 1906 Great Earthquake and Fire.The Exposition played an important role in art history. According to AskArt:

“One of the many lasting effects of the 1915 Exposition was the recognition, both international and national, it brought to artists and their work, and specifically to art activities in California. For the first time, visitors could see a representative exhibition of modern art from all the art centers of the world. In particular, they were exposed to the Impressionists and their use of color, spontanaety, and disregard for rigid scholastics. The stage was set, and seeds were sown for the development of American-style Impressionism, fauvism, expressionism, and all that was to follow.“

Christian Brinton, author of the book ‘Modern Artists’ and a visitor to the Exposition, wrote:
“The West has a great future in art. Indeed, I go so far as to say the future of art belongs to the West. It is inevitable. The freshness and vitality of your life, the stimulation of the environmental influences—these things must result in big things.”
This view is not the usual painted. I’ve painted the domed building before, so decided to try another view. 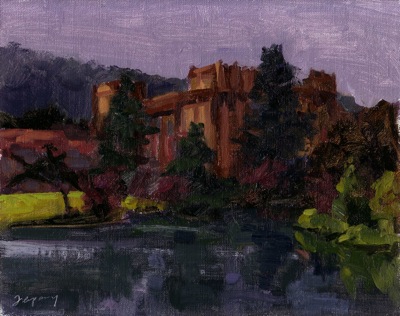